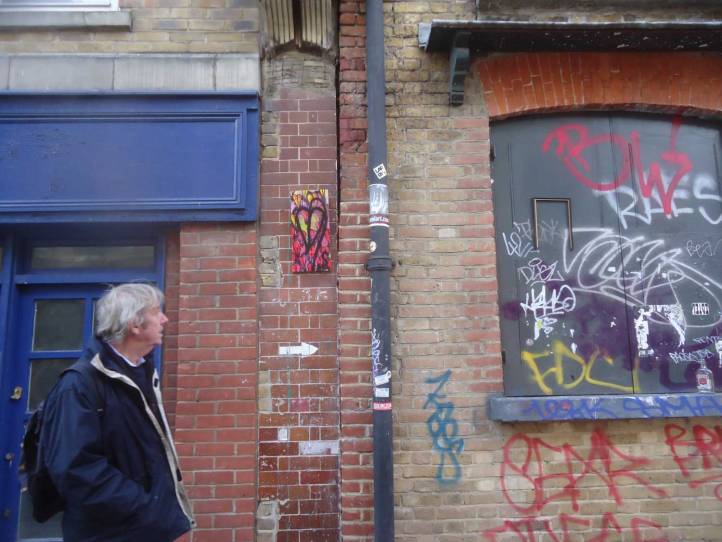 The idea was rather simple, it was rather spontaneous, a spontaneous thought on the first day of the new year. 2014 was spent exclaiming, the new year resolution was not to exclaim again, there had been dozens, hundreds, who knows how many hundreds of exclamation marks painted on canvas, on found things, on pieces of vinyl. on walls, hung in galleries, left on streets, there was one hundred exclamations painted on found pieces of material and left on the streets of the Hackney WickEd festival over one weekend in 2014, that was that year, 2015 would be a piece of work in 365 part, a paiece called #365ArtDrops, a piece that would last all year…

It has always been about layers and growth, about things evolving, about leaf growth, about leaves and how they grow on the things we just dump on the street, new layers growing on the waste we mindlessly make, the new layers that grow on old layers, the new on the old.

The interaction was important, the communication, the hashtag so that people could interact and be part of the piece of work as it evolved through 2015 was very important, seeing the photos of people was important pieces would be left, people would take photos and post them (instructions or requests to do so were on the back of the pieces.  I wanted the people who chose to take the work to be part of the piece, I wanted to get some idea in terms of where the 365 parts of the piece had gone to, I wanted to see the people with the pieces, I wanted to see what would become of the things that had originally been thrown out and were heading for landfill before I picked them up and painted new layers of leaf growth on them.  Engagement with art is always important, is there anything worse than art locked away behind the soulless closed door of an unfriendly gallery? 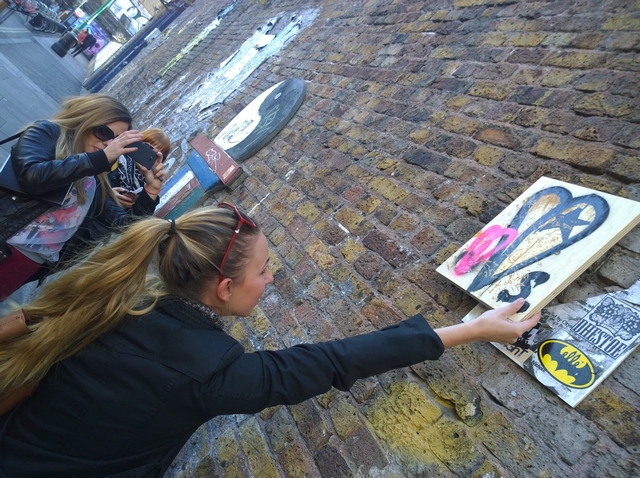 It wasn’t about a piece a day, it was just a year long piece of work in 365 parts, sometimes just one piece would be hung, sometimes a bag load of paintings, a dozen pieces taken out at the same time and hung around the streets of one area all at the same time.  A good percentage of pieces left around East London for that is where we were based in 2015. Pieces left around Hackney, hung in Shoreditch, along Brick Lane, on walls Hoxton, Camden, Kentish Town pieces left in pubs, on shop walls, outside galleries, banks, pieces hung under railway bridges in West London, on walls around London Bridge, down by the river, in Soho, outside the old Marquee, or where the George Robey once was, hanging in the Leake Tunnel. Not always London though, pieces were left in Kingston, in Shrewsbury, outside railway stations in Birmingham, on the Margate seafront when we were there for 2015 Art Car Boot Fair, it was mostly London though, I didn’t get to stray far from my studio that year., the pieces did though, the pieces sometimes went on great adventures….

We have no idea what happened to all of the paintings, I imagine some of them did end up in landfill anyway, we do know the fate of some of the 265 parts of the piece, we do know that pieces ended up in Chicago, in San Francisco, in Los Angeles, San Diego, in Argentina, Canada, in Australia, Ireland, Israel, Wales, Germany, Sweden, Spain and all over England.  We heard about pieces travelling to Newcastle, being taken to Bristol, ending up in Birmingham, in Oxford, Brighton, we found photos of people with their pieces posted on social media with the hashtag attached, people sent in photos, people sent in brilliant stories, tales, sometimes very moving tales, a couple of pieces turned up in art galleries, one or two were spotted for sale on internet auction sites, or re-hung in places we didn’t leave them in.  The piece of went on all through 2015, the final painting was left out just before midnight on December 31st, we hadn’t seen a hashtag used like that before, although quite a few artists have taken up the idea since and indeed the idea has been build up on here with several #43ArtDrop pieces and such in 2016 and 2017. It was about a lot more than just leaving free art for people (and it certainly wasn’t, as some had suggested), a publicity stunt, it was about many things on many levels, it was about whatever you wanted it to be about  it was a big part of my 2015, I hope you enjoyed it and if you took part then thank you very much.  (sw)

The whole piece was documented as it happened via a Tumblr page here. As well as via this website and this link during 2015 and early 2016.

Click on an image here to enlarge or to run the slide show and get a flavour, these are small number of the photos sent in, posted on line or taken by us here…