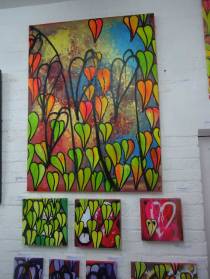 The found canvas from the end of last year has now emerged, alive with fresh growth for the Spring, the piece made what I think I can call a successful debut on the wall at Cultivate Evolved, gor March First Thursday, last night.  Here’s a recap, and the words from a post made on Facebook back in late November last year when the big canvas was originally found….

“TODAY’S BLANK CANVAS – THE MYSTERY OF THE WET PAINTING. Last Saturday evening, just after I had locked up Cultivate, somewhere around 6.30pm. I found a painting. There it was, just lying there in the middle of the road, a substantial canvas, lying there face down on the cobbles in the orange streetlight, waiting for the next vehicle along to carelessly crush it. Now those of you who know my artistic practices, will know there’s nothing I like more than finding an abandoned piece of unresolved art in a skip and recycling at least the canvas, if not the marks, so my first though was jackpot. Hang on though, what is this doing in the middle of the street? This hasn’t been thrown away has it? There’s no indication that it might be some kind of Free Art Friday (on a Saturday) gesture, and wait a minute, this is still (very) wet!

So no sign of life anywhere in the street, no lights on in any of the work spaces or galleries, no obvious sign of where the recently painted canvas might have escaped from. So, took said wet canvas back to Cultivate, locked it in, wrote a big note and stuck it on the wall explaining where it was should anyone be looking, and went off home. Asked around the spaces and studios that were open on Sunday, no one laid claim to it, no one shed any light on the now not so wet painting. So right now said piece of work is in Cultivate, if it stays around for too long then chances are a layer of leaf shapes are going to grow on the colourful textures – looks like an interesting set of colours and textures to paint on actually, but I do rather suspect this is something that hasn’t been deliberately abandoned though? Anyone working in the Vyner Street area on Saturday lost a freshly painted canvas about one metre square?”

And so last night at Cultivate the canvas emerged again… Well it was hung on Wednesday, and then ahead of the Thursday evening opening, a fresh layer in the shape of some black growth appeared on the canvas.  The piece was worked on back on new years Eve, and this week, was worked on some more….

The piece is now on the wall at Cultivate Evolved, Vyner Street, East London.  There is a certain pleasure in painting fresh layers on other people’s marks.

This piece from 2014, on another found canvas, about one meter square, is back on the Cultivate wall for a few days. This canvas was found with another the same size, one painted pink. one green, they had a notice on them, “please take”.  This one was worked on last year… it evolved through out the year actually….The piece will be on the Cultivate wall until the middle of next week.