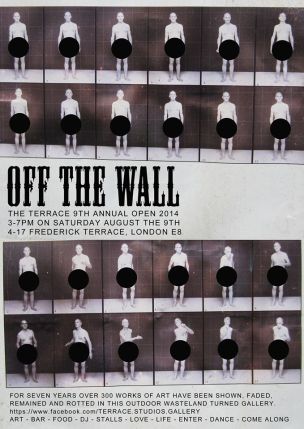 Somehow, somewhere, in the gaps and cracks that sometimes appear in the time that that is mostly eaten up by the running of Cultivate, I find time to paint… Cultivate’s third birthday is n owe on the horizon, it was only going to be a six month affair, it surely must end soon?

Rather pleased to have a big Dirty Great Flower of a painting in this year’s Terrace show next month. Didn’t find out about it until after the event last year when another artist who didn’t quite understand what it was about asked me to go break in and get her painting back. Me? Well I love the idea of work being left outside, I think all my paintings should be outside, that is, after all, what they are mostly about…

Last year’s 8th Terrace Annual attracted more than 150 entries and brought together a group of over 70 international artists whose work was installed alongside the previous eight years 250 entries. This one day only show is held outdoors in a private walled former piece of wasteland. The works have been exposed to the elements for up to eight years – They have shifted, faded, broken, rotted, remained and, in some cases, disappeared.

The 9th Terrace Annual Open ‘Off The Wall’ is on Saturday the 9th of August 2014 from 3-7pm and will include a Bar, BBQ, Cakes, DJ, Legion TV, Nocturne Lighting and more. After show drinks from 7pm at The Duke of Wellington, Haggerston Road, London E8.

A short film made by Abstract Critical about the Terrace Annual Show  – http://vimeo.com/24882175

Today, i am mostly painting on packing cases that were left outside Hada Contemporary after the delivery of some sculptures for Korea (that and dealing with Cultivate admin and such) ..