The 2017 One Hundred Pieced Piece for this year’s Art Car Boot Fair….

It has now become quite a tradition to produce a One Hundred Pieced Piece for the London leg of the Art Car Boot Fair.  A piece of work in one hundred parts, one hundred rather fast pop art flavoured paintings painted on recycled cardboard, each part of the piece for sale at just £1, and that is a very important part of the piece, the notion of art for everyone, that an original piece of art can be bought by anyone at the fair (I did get haggled down to 50p last year by one young lad who claimed he only had £1 left) and that material thrown away and heading for landfill should be re-used. And really if people are just going to throw things away without too much thought then leaves will grow on those thrown away things.

The Art Car Boot Fair happens this Sunday, this year in Vauxhall and not in Brick Lane, (don’t be going to Brick Lane). 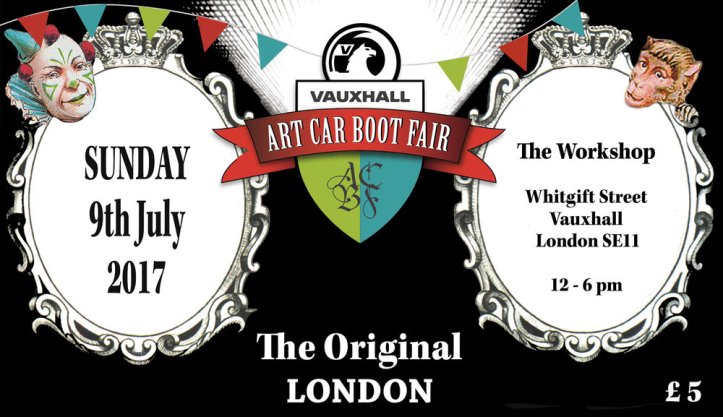 The 2017 Art Car Boot Fair is almost upon us, and as I’ve said on these pages before, always one of the highlights of our art year, Sunday 9th July is the date, Whitgift Street, Vauxhall, London, SE11 is the place so don’t be making for Brick Lane this year, Vauxhall is the place (which is good news for regular event sponsors Vauxhall cars)

And as a participating artist it is always an exciting pleasure to be invited to take part in the Art Car Boot Fair. This is the day when art lets down his or her hair (still wonder if art is a he or a she?), always one of the highlights of the London art Calendar, and this year things are to be a little bit re-booted. The theme is “Originals” and there’s an exciting new venue down by the Newport Street gallery in Vauxhall.   This year sees a return to the event being more about the actual artists than galleries and the rule is that all the artists will be there in their car boots there to talk to and should you wish to, buy art from them, then please do….

Karen Ashton, Founder of the Art Car Boot Fair says, “As well as bringing an original line-up to our new location in Vauxhall, we’ll also be drawing on all the talents our exciting new locale has to offer.”

“We’re right at the centre of Vauxhall’s burgeoning creative quarter with a fantastic array of galleries, pop-ups, and established gems like the Vauxhall City Farm, MI6, Beaconsfield Gallery and the Royal Vauxhall Tavern – so expect guys and spies, plus the odd Llama and lots of cool art in the mix this year! We’re also hoping for a guest appearance and contribution from the owner of the Newport Street Gallery. A special thanks to our new hosts U+I and The Workshop.”