This coming week, I think we’re agreed on We Could Not Agree….. 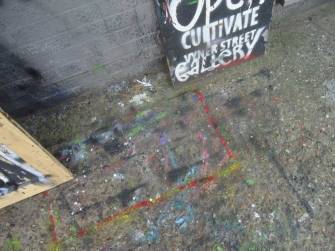 Cultivate, in terms of Vyner Street at least, closed last Sunday afternoon, a mostly positive three and a bit year experience, time for it to end though. Vyner Street was tire of me and me of it, I wrote a goodbye letter and left on the Cultivate blog page, well I couldn’t just leave without saying something – Dear Vyner Street, we’ve had a great time, it really isn’t you, it’s me, it really is, I’ll be back in five minutes…… and, for the avoidance of doubt, some more words here, The final Vyner Street weekend and an album of First Thursday images I did enjoy it, I really did, I think we’ll miss some of it, I really hope the next people don’t mess that space up, takes a lot of time and effort, three and a bit years really was enough. Enough or herding artists and shouting at the lazy arts media for a bit, enough of the frustration of Vyner Street. I did have a final say on a Facebook page called Vyner Street Art News that I ran (until this week) in an attempt to bring a bit of unity to the street

“This page was run by Cultivate, Vyner Street in the (foolish?) belief that Vyner Street was/is about a community of galleries, studios and art spaces and that people came (come?) to the street to experience the whole rather than just one part of it. The fact that it was about community and people coming for the whole thing wasn’t something the rest of the spaces appeared to understand or care about, happy to hide behind closed (often locked) unwelcoming sign-less doors that would miraculously open in a bout of self-congratulation on a First Thursday before closing again. There are still some great art spaces and galleries in and around the street, we wish them well, and hope they keep the special street that we’ve been pleased to be part of as a gallery for the last three years (and much longer as artists) going. just a shame that the other galleries didn’t appreciate what they had (have) a little more, didn’t engage a little more, open their doors a little more…. We leave you now, big thanks to everyone who came down the street while we were there. We shall leave this page here, we won’t have news of the street for you anymore, we’re not in the street anymore, not there directing people and passing out information from our corner (yes, that one is open, yes that big black door with no information is a gallery and yes it is open if you ring the bell)… We loved it, we’re pleased we did it, we were pleased to be part of something special and we’re pleased to be moving on to new things. We wish everyone in the street well, especially the new occupants of the corner space that was Cultivate from September 2011 until October 2014.. We hope this page has been useful. Thanks everyone, we (mostly) had a great time. Art should engage, not hide behind locked doors”.

Enough of Vyner Street for now, the street was good to us, I’ve no wish to kick the place Nettie Horn style (whatever did become of Nettie anyway? Went to Fitzrovia in a blaze of street-kicking glory fueled by a pet journalist who had no clue and rather went broke you say). We mostly had a great time, wouldn’t have missed it for the world.

Really didn’t intend to come here for a Vyner Street post-mortem, it was only one chapter in theon-going Cultivate adventure that we’re currently on.  Today car parks are the things occupying minds around here for we are only days away from We Could Not Agree. What’s that? There’s an Organ interview-peppered preview feature here –

ORGAN THING: “We are a challenge to Frieze because in many ways we don’t exist…” Vanya Balogh on next week’s We Could Not Agree art show in a car park

–  and yes, I am one of the exhibiting artists, this piece is still being worked on, a piece called Emma Street, involving some beautifully worn hinged wood rescued from a pile of discarded on Emma Street, East London that currently has a growth developing on it…