A solo show in an East London railway arch next week, a piece in Richmond Park and…

New shows, busy busy busy Summer coming up, leaves to grow, thorns to prune, layers to contend with, (you can of course keep up with some of this via my Facebook page or my new Instagram feed).  Two new shows coming up, both linked to each other. First some tagging in Richmond…

The nomadic thing that is Cultivate returns to the scene of January’s Reveal show and that railway arch by London Fields, Hackney, East London, as guests of Fount.  ThIs time a solo exhibition of paintings from Sean Worrall. 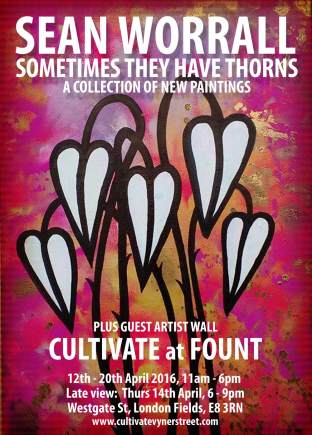 The show opens on Tuesday April 12th and will run until Wednesday April 20th (closed on the Monday), we will have a late night opening on Thursday 14th April when the show will be open until 9pm (expect guests, performance and more on the Thursday and throughout the show)

Sean Worrall will present a collection of his recent (ongoing) series of Sometimes They Have Thorns paintings that have been evolving during 2016. The series of paintings that started at the Reveal show and formed a big part of the #43 show that happened on the 43rd day of the year with that one day show on the street under a railway bridge, the series that continued at the recent Debaser show over at BSMTSpace and will continue once more with new work for this nine day solo show in the railway arch at Fount.

The gallery walls will be alive with thorny growth, leaves on canvas (although some see other things and talk of leafhearts and such), expect thorns, pruning of growth, gardening, painting on canvas, on found things and for the last time this year the canvas paitnings will be on sale at no more than £43 each (these will once again also be smaller pieces painted on found recycled vinyl or pieces of reclaimed wood, expect work priced as low as £5).

The show will evolve through the nine days with Sean working at the space (or outside the space) during the period.

And as is tradition now with Sean’s solo shows, there will be a guest wall of artists invited to take part and make use of one wall in the space (Cultivate is about getting art and artists out there, artists coming together and doing it ourselves)

And while Sometimes They Have Thorns is going on inside under the arch, outside we shall have an art mart, a small art fair….

CULTIVATE ART MART: On the weekend of Saturday/Sunday 16th/17th April, Cultivate will present an outdoor market/art fair in the yard of Fount, (with gazebos, tables, paintings, prints, stalls and such), East London Prints will also be there over the weeknd with thier extensive collection of affordable prints.

Fount is under the railway inside (and outside) an arch, right by London Fields, Netil Market and everything that goes on at Broadway Market, you have art, food, drink, vintage treasure and entertainment everywhere over the weekend…